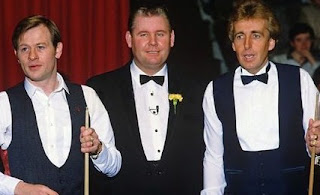 Len Ganley, the former referee and one of the circuit’s best known characters, has died at the age of 68.

Len (pictured with Alex Higgins and Terry Griffiths) was a familiar face on television for two decades, taking charge of many of snooker’s best known occasions in the 1980s and 90s.

He refereed four World Championship finals. The first was in 1983 when Steve Davis beat Cliff Thorburn. He also officiated the Crucible final in 1987, when Davis beat Joe Johnson, Stephen Hendry’s historic first capture of the title in 1990 and Hendry’s session-to-spare defeat of Jimmy White in 1993.

Len also refereed the famous 1983 UK Championship final between Alex Higgins and Steve Davis, in which Higgins recovered from 7-0 down to win 16-15.

If ever anyone fitted the description ‘larger than life’ it was Len. He was someone who enjoyed his time on the circuit to the full and was a distinctive, popular figure with TV audiences.

Born in Northern Ireland, where he was a chimney sweep in his youth, he settled in Burton-on-Trent in the early 1970s and, a keen snooker player, got into refereeing while working variously as a bus conductor and milkman.

He first donned the white gloves after he played Ray Reardon in a league match. When the multi-world champion got to a century, with the colours still on, the 600-strong crowd got over-excited but Ganley, with his imposing frame, hushed them and Reardon suggested that officialdom would come easily to him.

When snooker took off on TV in the late 1970s, refereeing became a full time job.

I know that when people who knew him remember Len they will do so with a smile.

Warm, ebullient and eccentric, his cult status was confirmed when the band Half Man Half Biscuit wrote a song about him: ‘The Len Ganley Stance.’

Len also appeared in an advert for Carling Black Label in which he was shown crushing a cue ball.

He was invariably involved in many of the laughs the circuit regulars enjoyed during long weeks on the road.

There was one hilarious misunderstanding in Aberdeen. A young lad clutching a programme approached him for an autograph and Len, ever obliging, asked him where he wanted it.

‘On the back’ came the reply meaning, of course, the back of the programme but a confused Len took the black marker pen and signed the back of his white sports coat instead.

Never one to take himself too seriously, he once had a personalised number plate which began ‘FLG.’

With great pride he explained it stood for ‘Fat Len Ganley.’

Less well known is the enormous amount of work Len did for charity.

Every year at the Crucible he collected money to provide motorised wheelchairs for handicapped children and raised many thousands of pounds over the years, which became millions through the golf days he also ran.

His fundraising method at the Crucible was direct: anyone he saw backstage, of whatever status or stature, would be obliged to hand over a ten pound note.

And this gentle giant certainly wasn’t shy of asking the great and the good to contribute to the cause.

Len was awarded the MBE in recognition of these efforts

He retired from the circuit in 1999 and returned to Northern Ireland to coach youngsters but still popped up from time to time to see his many friends.

In later life he suffered from diabetes and his health has been in decline since he suffered a heart attack in 2002.

His son, Mike, is the WPBSA’s tournament director. I send my sympathies to him and the whole Ganley family.

Another of the gang from the era that lifted snooker to the heights has departed the stage.
Posted by Dave H at 3:56 pm

May he rest in peace

I have just played the aforementioned record in Len's honour. RIP.

He will be missed. He was as much a part of that era as any player.

Sadly missed, he was a part of that golden era of snooker in which many of us including myself grew up.

met Len a few times and always did smile...

his son Mike is a credit to him too.

thoughts with Mike and his family

Hi David. Very sad news. Ln Ganley- A great man. A great referee. As you mentioned he refereed four world finals and the 1983 U.K. Final, to name five of the many great matches he refereed.

My condolances, best wishes and thoughts are with him and his whole family, Including, of, course, his Son and our snooker tournament director, Michael Ganley.

He is always going to be fondly remembered, sadly missed and never forgotten.

a great character off the table who did so much great work for charity and was always approachable for a quick chat whenever you saw him in and around the Crucible. Sadly he didnt look in the best of health the last few years but its still far too young an age to go at 68, though i think many including myself were surprised he wasnt older.

He was part of the golden age of snooker and along with the likes of Street and Williams was one of the refs who was instantly recognisable to the public.

Another link to the glory days gone sadly following the likes of the recently departed Higgins, Lowe, Vine etc

I never knew how he was able to keep track of who had coughed up their tenner and who hadn't from year to year. RIP Len, and condolences to Mike and the rest of the family.

I am numb with saddness at the passing of my great mate and true friend Len Ganley. A frequent visitor to my house, Len was the only one who kept in touch since my departure from snooker 1993, and we always enjoyed a laugh as we remembered stories from the snooker circuit days. A wonderful man who will be greatly missed by my whole family. Sincere condolences to Rosalyn and family. God Bless and care for you Len - RIP.
Colin Randle ex Tournament Press Officer and friend.

I was sad to hear of Len's passing..he was synonymous with TV snooker in the 80s and really the best ref in the world at the time.

I tried to look for his advert on You Tube, but couldn't find it. If anyone has it, please can they post it up!