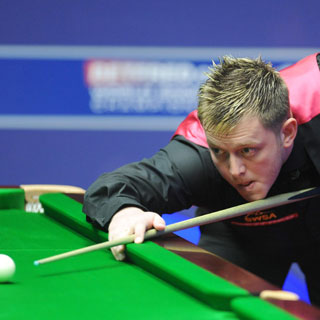 Mark Allen made a controversial first round exit at the Crucible last season but heads to Sheffield this year in form and with a claim to be among the contenders for the prize.

But bare results without context do not tell the whole story. Far from it, in fact.

One factor that has counted against Allen during the campaign has been a series of draws in which he has come up against top players playing really well.

Marco Fu did at the UK Championship. Neil Robertson did at the Masters – Allen’s last shot here was to trap him in a snooker – and Barry Hawkins played out of his skin in Berlin.

Allen did nothing wrong to lose the 4-3 thriller to Ding Junhui in the PTC Grand Finals and ran into a rampant Robertson at the China Open.

So at times he has done little wrong to lose. And his Crucible draw is a stinker. Allen has landed in the same quarter as Ding and Mark Selby.

It is this, rather than any worries about his own ability, which counts against the Northern Irishman, who is bidding to emulate his celebrated compatriots Alex Higgins and Dennis Taylor by triumphing at the Crucible.

Even so, the Antrim man isn’t a player many would want to run into. He boasts a fierce competitive spirit and is a very heavy scorer. He plays quickly and can thus both dominate and intimidate opponents.

Allen was a World Championship semi-finalist in 2009 and a quarter-finalist in 2010. He now has ranking titles and a highest ever ranking of sixth to prove that he has the potential to go further.

A cool head is needed, though, in the heat of the Crucible. Allen would need to channel his natural feistiness into a long, stamina sapping 17 days in which plenty can go wrong.

It isn’t just the time spent playing which counts but the time spent between sessions, dwelling on scorelines either favourable or otherwise, keeping your mind as clear as you can for the battles to come.

In this regard, Allen is fortunate to have in his corner two men with perpetually cool heads, his coach Terry Griffiths, himself a Crucible champion in 1979, and manager Paul Mount.

In 1982, Alex Higgins curbed his wayward temperament to win the title for a second time. It wasn’t about his opponents so much as himself. Allen is nowhere near as volatile as the Hurricane. In fact, give or take a few sharp comments, he isn’t volatile at all, but he is an aggressive competitor and must cope with the slings and arrows of outrageous snooker fortune however they fall.

Allen has a really good chance this year. He is playing well and certainly doesn’t fear anyone, neither should he. They should fear him. When he gets on a roll he is something special to watch.

There are many big beasts of the snooker jungle to slay but Allen has the pedigree to make a name for himself once and for all where it really matters: on the table.
Posted by Dave H at 10:00 am

I would say he's good enough to win it, but not good enough to beat Selby and Robertson this year. The fact is he has no great record to his name in the long format matches (just a single WC semi), and he has to go through the two best players of the season just to reach the final. Could do a number on one of them, but not on both. The same goes for Ding too.

I would love to see Allen win but the track record isn't there and I sometime wonder how angry he feels inside.

With the right support team, he could win several blue ribband events, but I cant see it this year.

Good point, exciting player but there are to many other strong contenders who I can't see him beating over a longer format.

He didn't make many mistakes and still lost all the matches you mentioned.If he can find his form, the one that he had against Higgo at the World Open he wll be hard to beat.Anyway he's got a tough draw and I don't think this year is his.

Allen is fine over the longer frames and has proved himself - UK finalist (17) 18 months ago and a World-semi final and 2 quarter finals. There is no issue with that.

He is one of the few that is good enough, make's centuries for fun when he clicks, has lots of bottle and determination.

The problem is a rage inside that he appears to live with - with authorities, other players sometimes and perhaps also his personal life. Of course he has a point sometimes when he's outspoken and see he has been already at it on the eve of the championship, putting down next season's calendar. Other players can raise these issues quietly but Allen I think needs the headlines. Until he sorts this inner fire out (if he ever can) he won't become world champion and will have to wait a few years until he matures more so before being able to lift the games biggest prize.

Agree, all this inner fire zapps his energies, energy that he badly needs for the long 17 day marathon of the mind.

Lets be honest, if he takes care of the petulant Milkens on Sunday, his reception at the Crucible will be the greatest of the 17 days, by a mile.
His contribution to the game simply cannot be overstated.
As Hearn has said before, you pay for a seat to watch White, then sit on the edge of it !
Certain Dave will dedicate a blog to Jimmy if he qualifies.
So, lets all get behind Jimmy White and recognise that the modern game owes him a great debt.
Go on Jimmy !!!

To be fair he reached the final of UK Lite. He only won one long match in the whole tournament. His accomplishment there wasn't really much different to winning a normal tournament where you have to win a double session final. The fact that he has only got past the QF once at the Crucible does suggest he's coming up short against the top boys, and it's extremely likely he will have to beat the two top players of the season just to reach the final.

Mark's had to learn a few tough lessons, but learn'em he has. He IS getting stronger, and he doesn't lack personal belief or the will to win. On the naughty scale, he's naughtier than Judd, IMO.

11.16/11.51 - agree Jimmys reception would be on par with Ronnie's but you say Milkins is "petulant" but at least he scores. Jimmy only made 1 break over 50 in 17 frames versus Pengfei and only two 50's and one 60 break in 14 frames v Guodong. If you think this type of scoring will enable him to have any kind of run, then you're thinking of the Jimmy of over 10 years ago! Milkins is a notch in class above today's Jimmy, and the Jimmy of today will have to try and grind out a win with lots of tactical play and 20 and 30 breaks mostly. Gone are the days when Jimmy can blitz anyone off the table.

I disagree jimmy can still make big breaks on his day. I hope he makes it to the crucible him drawing ronnie would be a dream match and what an opener that would be to the WC Saturday morning. Can't wait !!

I'd put my money on Jimmy before Allen.
And on other Marks even before this one.

But can he do it for the duration?

Just adding to 1.31's point, when he reached the UK final, the only seed he faced was Ali Carter who was really struggling with Crohn's at that point and seriously considering retirement, so wasn't in the best mental state.

Not taking anything away from that achievement, he was best from that half that week, but you wonder if he would've made it if had to face Ding, Selby and Robertson instead...

great player, but fast becoming the player who says the most stupid things (after the spotlight kid, obviously).

He's got a decent record in the world's. He has played in it for 6 seasons and reached 1 semi and 2 quarters. Ronnie after his first six years had 2 semis and one quarter, and he did ok! Graeme Dott's record in his first five years was 2 wins and 5 defeats, then reached a final.

So the barometer of winning big matches and playing big matches Mark Allen has more than many at 27, but he has some way to go. He certainly has the temperament and the game, but is not quite the game of the top few. Can he win it? Of course, but he needs to play his best and beat the best, which he has done, but hasn't done consistently enough thus far.