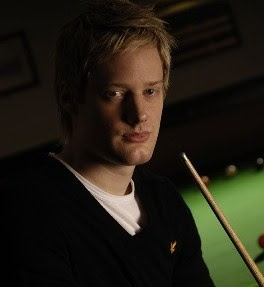 Neil Robertson was the worthy winner of the Bahrain Championship.

He went to Manama low in confidence but gradually found some during the week.

His performance in beating Stephen Maguire in the quarter-finals could well have turned his entire season around.

It’s unfair on the late Eddie Charlton to compare these two Australians because he was at his peak before there was a recognisable circuit like today.

Nevertheless, Robertson has a reasonable claim to be Australia’s most successful snooker player ever. His victory in Bahrain gave him his third rankling title. Only 15 other players in the game’s history have won this many.

He had some off table stuff to deal with last season that distracted him from his on table efforts.

He now has a new coach, Steve Prest, and practises in a new club and will hopefully kick on from this victory and win more tournaments.

I hope so. Neil is good to watch and it’s good for any sport to have players of different nationalities winning titles, particularly in the British dominated game of snooker.

Matthew Stevens could have led the final 8-6 but missed an awkward black and failed to win another frame.

This was a further disappointment for a man who had already won only one ranking title from six finals.

At least he has some confidence back and a bunch of points as he attempts to rejoin the elite top 16, which is where a player of his class belongs.

So what of the Bahrain Championship?

Not even the most deluded spin doctor could claim the crowd turnout during the week was good. It must have been the lowest attendance for a ranking tournament final I have ever seen.

Players thrive on an atmosphere and tend to raise their game when the crowd gets behind them.

We saw much high quality snooker during the week but the event obviously missed Mark Selby, John Higgins and Ding Junhui, who were all contracted to play in the Premier League, and Ronnie O’Sullivan and Steve Davis, who withdrew with sick notes, although of course Davis was also in the Premier League.

If World Snooker stages this event next year then they should do so at a time when everyone can enter and if they have to come to a separate arrangement with O’Sullivan to get him there then they should seriously consider that as well.

No one player is bigger than the sport but snooker benefits from having all its stars taking part in tournaments, particularly new ones in new territories.
Posted by Dave H at 2:45 pm

It was an interesting tournament and it was good to see some players return to form.
Never in a million years should World Snooker come to a separate agreement with Ronnie to appear in any tournament and I cannot believe you are advocating this approach.
What happened to the Snooker Scene "policy" of fairness for all?
You write some excellent articles on this blog Dave but this "idea" is by far your worst.Whenever you have different rules for different players you will create total resentment.It is already perceived that Ronnie receives favourable treatment so to do what you suggest would alienate every other professional player.
Of course the governing board is weak when it comes to Ronnie so it wouldn't be a surprise if they paid him appearance money or something similar.
It would be totally wrong though.

I'm not against appearance money. It happens in golf and tennis to guarantee the top players at events.

It's happened in snooker as well but in the form of paying for 'promotional activities'.

In the 1940s, Joe Davis retired from professional competition but continued to play in exhibitions. It led to the death of the World Championship as everyone knew the best player was not in it.

I'm pleased to see Neil win. An exciting player at his best, I was concerned that his performances from two years ago could be a flash in the pan, but hopefully this title can kick start his career again - depleted field or not.

I also agree with the nationality comment. In my view, the powers that be don't do enough to encourage top class overseas players like Neil, who instead have to go to Prestatyn or elsewhere in the UK in order to commit to the tour.

It was good to see Stevens play well again, but can he get back into the Top 16? I'm not so sure. I think he can be dangerous over a longer distance event, like the UK and Worlds, but I don't think he will be the sort of player (at this stage of his career) who will remain consistent throughout the year.

While the payment of appearance money is made in Tennis and Golf, for the best players, you can not guarantee which ROS will turn up to represent the sport of snooker.
Due to his mind set, it is very possible that even after accepting an appearance fee, ROS would falter in a first round match as he would like to get back home. so although he is the only real draw in snooker, he is unreliable as an option and the governing body could be left with more egg on their face, if there is any space left.

I must admit that I would be totally against ROS being paid extra to play in Bahrain too, I think that if it were to happen then he pretty much would become bigger than the sport which would be sad to see.

Yes the tournament as a whole would be better for having him in it but giving him extra cash to do so would just be asking for trouble. I know that I'd not be happy if I were another top player.

Is Steve Prest still working with Shaun Murphy as well then?

never heard so much garbage in my life (not a nasty comment, just my opinion). there should be no special treatment to someone if they dont want to go under the terms everyone else does. just let anyone stay at home if they want, but ask them not to enter instead of pulling out last minute!

WS cant even pay folk like Chris Small through his problems....and someone close to the game is suggesting treating someone who a lot of folk think takes "the mickey" out of WS to a higher pay day cause he doesnt like to travel far from home? i had to read it twice to believe youd said something like that. :(

It happens in all successful sports

Also, it's happened before in snooker

Leaving aside my views on it aside, do you think that the other top players would be happy with it?

To be fair I can see your argument (I think), if O'Sullivan were to guaranteed to play in this way then in theory more sponsors might come in, crowds would be bigger, prize money would be bigger so everyone would benefit that way, if not directly.

its not whats needed IMHO. youre entitled to yours. i was merely commenting mine. he already gets treated with kid gloves

If World snooker stages Bahrain again 2009, then, I suppose the dates would
be settled pretty early and then the dates for other activites should be settled.
Premier Leauge effectively blocked
10 weeks this autumn, maybe we have to live with tournaments where a few players can´t participate.
They were actually not that much missed in Bahrain anyway.

Appearance money in the other sports is paid by the sponsors.Obviously this would be a problem in snooker as there are no sponsors!
If the event did have a sponsor and they wanted to pay appearance money then that is fine but the governing board should never use its own funds this way.
If snooker only has Ronnie to attract sponsors then it really is in BIG trouble.

I was under the impression that Ronnie had already received appearance money to appear in an overseas ranking event? perhaps i'm wrong.

The appearance money situation in Tennis and Golf is often paid because top players have top tournaments to choose from being played at the same time. Obviously this is not the case with Snooker. Also with O'Sullivan I don't think the extra money would make any difference if the tournament is abroad. In UK tournaments it is not needed as he is happy to play in them usually. If a player has a sick note which allows him to miss an overseas tournament then he should not be allowed to play in an exhibition or the Premiere League match during this period. Sanctions against any player that does this should be taken by World Snooker in the form of fines and loss of ranking points.

I believe the situation in Golf and Tennis is more to do with being paid to appear in invitational events. I have followed the structure of Tennis for years as I see it as the ideal model for snooker.

All professional players have to enter a tournament in advance (nothing new!) and are selected to appear based on certain criteria.

This would work in snooker if a number of tournaments were on at the same time. At the moment ranking events are actually few and far between.

One theory I always mention to people when I talk about snooker is why World Snooker doesn't take in smaller events in up-and-coming nations like Austria, Germany, Belgium and Thailand. Give them ranking status and apply ranking points dependent on prize money etc...

As for Ronnie getting paid, I don't agree, great player, but he should be treated as every other player is treated.