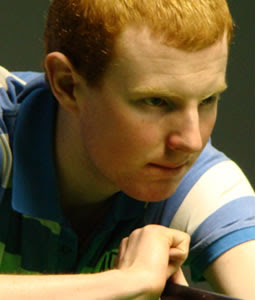 From the carnage of the war torn Scottish amateur scene comes a survivor.

But only just. Anthony McGill, 20 this week, admits he almost quit snooker after the poisonous atmosphere at junior tournaments steadily sapped the youthful enjoyment of competition.

The ins and outs of the civil war north of the border are frankly too tedious to detail. But the long running struggle certainly did little to enhance the prospects of the next generation of Scotland’s snooker fraternity.

McGill was one of them. Like many a youngster he was entranced by snooker and just wanted to play. The arguments and petty squabbles were of no interest and, eventually, something had to give.

“There was a time when I thought it wasn’t worth carrying on,” McGill said.

“My dad was involved in it all. He was trying to sort it out, make it better, but it was taking its toll on the family and it wasn’t always a lot of fun in the house.

“Snooker is nothing compared to your family so I considered giving up. Just as I was thinking about doing that I won a PIOS event, so I knew I’d be on the main tour.

“But it was horrible turning up to those junior tournaments. Nobody seemed to like anyone and you couldn’t enjoy playing in them.

“I’m glad things seem to have been sorted out now and that the juniors today don’t have that going on. It wasn’t a nice few years.”

His apprenticeship may have been served amid much unpleasantness but McGill is now reaping the rewards of his decision not to hang up his cue.

He has enjoyed a highly productive debut season on the main tour, rising to 56th in the rankings and enjoying wins over fellow Scots Stephen Hendry, Stephen Maguire and Alan McManus in the Players Tour Championship.

“I’m delighted with the season I’ve had,” he said. “I didn’t think I’d do as well as this but I’ve beaten a few good players so I’ve exceeded my expectations.

“The PTCs were brilliant because I was playing pretty much every week, plus I was playing top players in less pressurised situations than you’d get at a main venue.

“Last season there were only six tournaments. I’d come close to qualifying but, looking at it now, I’m lucky that I didn’t.”

McGill’s first snooker memory was watching the TV, as a seven year-old, as John Higgins won his first world title in 1998.

Now he practises with the three times Crucible champion and other leading Scottish professionals, an invaluable chance to learn more about the unrelentingly difficult game of snooker.

“I usually get a game with Marcus Campbell once a week and also practise pretty regularly with John Higgins and Stephen Maguire," he said. "I’m dead lucky because they all live close by.

“It’s helped me do well on the tour because it’s such tough practice. My game has improved quite a bit over the last year.”

It was on a family holiday to Spain where McGill first took to playing: “There was a pool table in every bar and I went on one. I loved it and my parents had to decide whether to buy me a PlayStation or a small snooker table for Christmas that year. They got me the snooker table, so life could have been very different if they’d picked the PlayStation.

“I loved playing so I started going in the club every weekend and then every day after school.”

His ascent up the junior ranks was rapid and, in 2006, he appeared in the Junior Pot Black final, which was played at the Crucible during the World Championship.

“It was unbelievable,” he said. “I was only 15 and I was playing at the Crucible. I’ll never forget that.”

McGill certainly has the talent to accumulate a store of Sheffield memories. The qualifiers for this year’s World Championship are just a month away.

First up, it’s the German Masters this week, his first appearance in the final stages of a ranking event. If he beats Dutch wildcard Mario Wehrmann he will face Mark Williams in front of the television cameras.

Stephen Hendry’s success ushered in a golden era for Scottish snooker. In 1987 he became the fifth Scot to play at the Crucible. Since then, 13 more have competed there but the last Scottish debutant was Maguire in 2004.

“The last young Scottish player to break through was Stephen Maguire and that was ten years ago,” McGill said. “We’ve had a few barren years but I can hopefully break the pattern.

“I’d like to get into the top 48 next, that’s my goal, and keep qualifying for tournaments.

“I’ve learned so much in my short time on the circuit. I didn’t realise how attacking I was but in the first few tournaments I played a few old heads and they didn’t take anything on. They just tie you up, so I had to develop my safety.

“But you have to take your shots on as well. It’s tough to strike a balance.

“You have to have a good temperament as well. You can’t afford to let things get to you otherwise these guys will steamroller you.”

To this end, McGill has immersed himself in several books about the mind, encompassing strategies for keeping cool.

He’ll have plenty of opportunities to apply the theory in future tournaments due to the increased number of events scheduled for next season.

McGill has already experienced the rush of a big arena at the Shootout in Blackpool last weekend and is hungry for more – much more.

“The Shootout was awesome. It was a great experience,” he said. “I’m very fortunate to have turned pro when everything is all go.”

Just as wrangling administrators almost caused him to walk away from the game, so the elevation to the World Snooker chairmanship of one of UK’s sport's brightest promoters has given McGill the perfect chance to show the world what he can do.
Posted by Dave H at 10:00 am

Good Luck to the Tartan Nugget!

First saw him at EPTC in Gloster, then in Prague. Became his fan almost immediately.
Wish him all the luck in the world and thanks for the interview, Dave.

Absolute brilliant guy and player,hes my friend ,i was with him at blackpool,my son is a promising 14 year old junior and the help that ants gives him is priceless. Ants will be world champion one day.
He practiced with john higgins in our club last month, 1st frame john broke ants hit a 147, nice start to the session

used to see him in spencers
very good prospect
dont see him bettering maguire oveerall, but has potential to win a major or two, possible even a worlds in time, though doubt he will rise and stay at the top for years.....