CAN RONNIE DO THE GRAND SLAM? 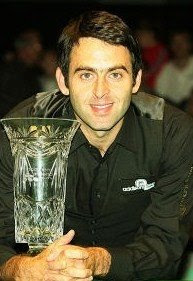 Since a proper ranking tournament circuit was established, no player has ever won all the titles on offer in a single season.

Stephen Hendry came closest in the 1990/91 campaign when he captured five of the eight titles on offer.

Could Ronnie O’Sullivan complete a grand slam this season?

It’s unlikely but not impossible.

Because he is not playing at his very best all the time but still winning titles. Even at 80% of his game he is still the best around at the moment as he proved in winning the Northern Ireland Trophy last night.

Whether this amuses, embarrasses or doesn’t interest him at all I don’t know but he's untouchable at the moment and the challenge for the other top players is to raise their games and stop him running away with most of the silverware this season.
Posted by Dave H at 10:00 am

After a week of watching Eurosports coverage of the Northern Ireland Trophy I thought the channel had turned a corner with their pretty good TV coverage. But alas they pull the plug on the trophy presentation. We all love to hear what the winner(especially Ronnie)has to say. Still after I read the reports I hear Ronnie has said he can reach 30 Rankers in his career but is unlikely to match Hendry's total of 36. I reckon Ronnie is playing this down a bit and is very likely(if he stays interested in the game) to get close to Hendry's record as his game is getting more consistent as he gets older. Don't reckon it's possible for him to do the Grand Slam cos I don't think he'll bother with the overseas events. I reckon it's realistic to think Ronnie could reach 40 Rankers and maybe 6 World Titles. In the end it all boils down to one thing. RONNIE himself.

I wouldn't be so sure about overseas tournaments. After his last year "faux pas" Ronnie might well be wearing his "I love China" T-shirt this season.

Will World Snooker conduct an investigation into Peter Ebdon's 'effort' against Liang Wenbo on Tuesday? I think some serious questions need asking as to the reasons why he lost 5-0

Yes Eurosport really let itself down in its coverage of the final. First a clumsy switch from Eurosport2 to Eurosport International in Continental Europe (in the UK coverage stayed on Eurosport2 the whole time) which meant several minutes coverage of the start of a frame was lost. Instead we got promo after promo. Then a rush out of coverage at the end just when the two finalist were being interviewed in English. This was so we could see a pre-packaged programme on car crashes. Why did it happen Dave?

Ronnie had to get through three deciding frames to reach the final, and didn't meet a top 4 player. He'll face much tougher tests in the coming season.

Don't get me wrong, it was a good win, consecutive rankers is already an achievement, and it's great to see Ronnie's improved attitude. I just don't see any reason to think that he might dominate the season in a way that even Hendry or Davis never could.

These things are disappointing of course but snooker gets more than good showing on Eurosport, bearing in mind the channel shows 120 sports a year

Fair enough Dave. Thanks for the answer. Of course you're right, Eurosport brings us all the Snooker tournaments for which we are very grateful.

Anything can happen but some things are more likely to happen than others. Deep, isn't it?:)
It is absolutely impossible for one player to win all tournaments on offer during one season, since it would mean that the player in question would have to sustain a constant level of concentration and hunger, all his opponents would have to be less than stellar and good fortune and health would have to be always present.
Too many variables.
During the post-match interview Ronnie said that his aim for the NIT was to "get a few matches under his belt". Now, customary downplaying aside :), I believe he expected a decent run and some decent performances in Belfast. I also think that Ronnie has reached that stage in his career where self-satisfaction and pride of performance have become as important as winning. Titles, money, fame, you name it.

Also, why weren't you allowed to show the trophy presentation? That is strange.
Thank you.

It's nice of Dave to chuck in some tabloid sensationalism for us to consider!
Sooner or later Ronnie will resort to being an arse and won't try very hard in a match and will lose.It happens every season and there is no reason to believe this one will be any different.
Having said this his performance over the last week was impressive.He wasn't at his best but still won.Both Hendry and Davis did this when they were dominating the game.
It was good to see Harold play well again and the fact that both Carter and Perry have started this season in good form should prove that Sheffield wasn't just a one off for either of them.
The continuing decline of both Ding and Robertson isn't good for the game though.They really need to sort themselves out soon.
I still cannot believe Dave predicted Hendry to do well.I cannot see him winning a ranking event again.He hasn't had the game for several seasons now and there is no reason to believe this will change.However it would be nice to see both Hendry and Davis do well in,at least,one tournament this season.
Fred

Nobody thought Jimmy White would win the 2004 Players Championship

Nobody thought Steve Davis would reach the 2005 UK final

I was referring to your comment about the prospect of Ronnie winning all the ranking events this season.To me it was like reading a tabloid headline.
If Woods or Federer cannot win all four majors in a single season(and they act professionally all the time)Ronnie has no chance.
I hope you are right about Hendry but the game is getting harder for him every year and his form doesn't improve.He might be the best player ever but that doesn't give him the right to contest ranking events now.He has to earn that right on the table and his performances don't justify any optimism on this front.
Williams is equally talented and several years younger than Hendry and he's still struggling to compete at the business end of ranking events.
Good luck to them both because they will need a big slice of it to win a ranking event again.
Fred

Why nagging on Ebdon losing 0-5
to Wenbo?
He got blown out of the water in Beijing 0-5 to Ding, a set up also?

jimmy Whites winin Players Ch. is the more questionable but nobody likes to downgrade that win of course.

Anyway, as ruomors goes, were Paul
Hunter thanked by Jimmy for letting him win.
Hunter denied it strongly but watching the match you had to wonder.
If I remember right, then Ebdon
lost to White too and made some
very strange positional shots with
wrong speed to eventually snooker himself and lose the matchwinning frame.
O´Sullivan were close to no show too and the players Championship is
the closest I have come to suspect
a setup.
The Rocket had already won the Grand total, why not let Jimmy win
a last time if the chance occured.
The odds were long too and it was
a win-win for everybody concerned.
Jimmy, probably had no idea.

I think Dave has made a fair point about the dominance of Ronnie O'Sullivan, the current UK and World Champion.
However, not for one second do I believe he will win everything this season.
Despite Ronnies obvious brilliance, he is a human being with blood running through his veins.
Also it shouldn't be forgotten that an untimely kick which Barry Hawkins sustained during the deciding frame of his quarter final robbed him of a great win against O'Sullivan.
Its a fair enough point to remember that the two most prolific winners in the sport (Davis and Hendry) never achieved this feat in an era where the overall standard wasn't so mindbogglingly strong as it is now.
A great talking point though, with the Shanghai Masters next month likely to put this baby to bed for the errant Rocket and the writer of this most interesting blog.

I'm so torn with Hendry, I've always been a huge fan of his and I'll always be a huge fan of his, but my belief in him these days is at an all time low, age catches up with everyone I guess. I don't really expect him to win a ranking event again and I can see him slipping out of the top 16 in the next 2-3 years, though I hope I'm wrong.

Despite that though I'll still keep following him and attending the matches because as Dave says, you just never know. I didn't for one minute think that he'd make the semi-finals at the Crucible this year, I didn't think that he would beat Allen in truth and I was resigned to him being 26th or something on the one year ranks this year but look what happened this year. Being in the Crucible for that second session of the Allen match, seeing him win that frame from needing two snookers and then clear up like he did in the final frame...was total magic and you just never know when it might happen again.

For that reason and because of how good he was at his peak, there will always be a part of me that thinks he can win. I mean I really don't mean to sound disrespectful to the likes of Dave Harold, Fergal O'Brien, Dominic Dale etc because they are all very good players, but if they can reach ranking event finals then with a half-decent draw surely Stephen has a shot.

Do you reckon he'd continue in the qualifiers if and when it comes to that?

It would be a massivefeat for any player to do a 'Grand Slam'. I have been following the UK 9-ball Tour this season and Imran Majid won the first 4 of 6 ranking events this season, he came unstuck at the semi-final stage of the latest event this last weekend. As Dave states it is not impossible but highly improbable.

I have to question whether Ronnie has the motivation to actually win all of the ranking events, plus there is always someone that will have a fantastic tournament and hit some form at some stage.

The likes of Murphy, Maguire, Higgins and Selby will al be dangerous at some point!