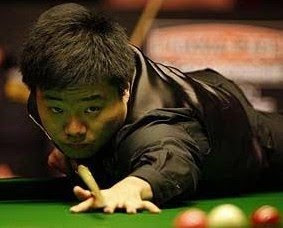 Ding Junhui’s season was one of much improvement after a couple of disappointing years.

However, the campaign ended in a second round defeat at the Crucible to Shaun Murphy. This in itself was no disgrace but Ding is still yet to appear in a World Championship quarter-final.

He did little wrong against an inspired Mark Williams in the second session of the China Open final and, from what I’m told, hardly made a mistake from 8-2 up to Murphy in the Wuxi Classic final, which he eventually lost 9-8.

Ding has defied the dire predictions that he had peaked as a teenager and would not settle down as a top player. It was easy – and forgivable – to expect much more of him considering his golden 18-month spell from March 2005 when he won the China Open, UK Championship and Northern Ireland Trophy.

Back then, he looked like a certain top four player and possible world champion. Neither of these has happened yet but, at 23, he still has plenty of time to add to his achievements.

Of course, he suffered that confidence-sapping drubbing to Ronnie O’Sullivan in the 2007 Masters final and had to deal with the expectations heaped on him by the largest country on the planet.

These have been eased by the emergence of Liang Wenbo, whose rise up the rankings may also have created a rivalry that has helped spur Ding on.

He seemed happier last season in general. Moving from his home to live in the UK was not easy but he appears to have settled now.

One change this season is his practice base. The World Snooker Academy is now a qualifying centre so Ding has had to find somewhere else, but I understand his manager is setting up a new facility in Sheffield so this won’t be such a seismic shift.

Ding starts the new season fifth in the rankings, his highest ever position. He started the campaign just gone struggling to stay in the top 16 so this represents a vast effort.

He remains a rather shy young man not entirely comfortable with the spotlight. People are made differently. It’s easy to say a sportsman should be this, that or the other but ultimately people are who they are.

Ding gets criticised because often in the arena he looks thoroughly fed up.

So what if he does? I’ve never understood the juvenile demand that players should ‘smile more.’ What if there’s nothing to smile about?

And how many top sportsmen or women go about with fixed rictus grins on their faces when they are trying to concentrate on playing their chosen game to the best of their ability?

He inevitably has people fussing around him trying to market him in a certain way or telling him how to behave. My advice is simple: let Ding be Ding.

Let him concentrate primarily on what he has loved doing since he first came across the game as a ten year-old on the table outside his family home: playing snooker.

be interesting to see if Ding is as successful this season. He certainly was very consistent last season at a high level - if he carries on in this vein he could well end up at no.1

He does need though to do better at thec Crucible - semis at least..

I think Ding is going to be in the top 16 for many years to come. The number of chinese players making it to the televised stages seems to keep growing.

I don't like this development although they are not all boring robots like Ding. It would be nice to see mainland Europe get more players on the tour and hopefully snooker will see renewed interest in the UK and thus continue to produce the talent to dominate.

i am glad he bounced back after that match against Ronnie. i put the blame of all that firmly at the side of the audience members who acted like they were at a bullfight. at least ronnie reacted in a decent manner that day, for once.

dings b game is what can let him down, as there are about 8 other players who can mix it up better when they are not on their a game

I was so glad to see him rebuild
in 2009/2010 - Snooker really needs a contented,relaxed Ding Junhui - who is playing near his best.

The most crucial years of his career are yet to come.

But questions still remain how he would cope in another atmospheric Masters Final or if he were to get to the latter stages of the World Championship - we don't yet know.

More titles to come for sure - which type of titles is another big question.

But with very stiff competition at the top end of the rankings - nothing is a guarantee of success.

Though - I would be surprised if he didn't win 15 ranking events &
2 World Titles during his career.

Then again,those stats could also be applied to Robertson,Murphy,
Selby & Allen !!

I think Ding's problem isn't that he hasn't got a B game, it's that he hasn't got an A game. He was the most consistent player last season but when he came up against a top in form player he couldn't raise his game. The one final he did win was one where Higgins looked tired and was missing easy balls. You're going to win plenty of tournaments if you have a consistently strong game like Ding has, but maybe it's the reason for his poor Crucible performances; even in weak years like 2005 and 2006 it was won by players who raised their game to top 3/4 standard. Ding is going to have find an upper gear if he is ever to win at Sheffield.

this is not a sunday stroll in the park or a teadybear's picnic this is hard matchplay snooker and when people pay to come in to watch they will have one favorite over the other..what happened at wembly wont kill him and it will and has made him stronger.

Dave I'd like to thank you for each of your Player - BLOGS you wrote lately. I think it's so good that you write what you think instead of the try to be political correct all the time. I had much fun translating your BLOGS into German, so please: Write more :-)

4:14 is obviously being ignorant of what went on that day.

I have heard that an old coach of mine (Mr Hey You) has been writing on this blog. I didnt know he was doing this until recently and i asked him to stop writing such things but to no success. He is a lovely old guy who just loves the game. But just want you all to know that what he writes on here has got nothing to do with me (Ian Glover).

8.31 .wrong as always .snooker in china is in its infancy yet already there are 2 players who are world class and plenty more due to come through the rankings.there are 10 year olds in china already making 100 breaks and it does mean something . the last time i played someone that young who could make 100,s in the uk was a certain ronnie o sullivan. i will wager in ten years snooker players in china will dominate . its all about grass roots and there are no good juniors in the uk like there is in china now. even ian glover has dismissed your ramblings who apparently u taught the fine art. when will u learn to stop spouting rubbish. i actually feel sorry for you.

Snooker © The Fine Art Method
A secret is wasted if not shared
Dear Mr X @ 10: 52 pm Hello Dave!
Your fear Sir for your job at the Sheffield Academy is unfounded and getting Ian Glover to do a “Quisling” doesn’t make one iota of difference to the “Fine Art” copyright.
Ian sadly is a “Constitutional Inadequate” that has chopped and changed from one generous sponsor to another, starting with his first move to the Mathew Couch club over twelve years ago.

Ian’s last sponsor John Cox (Physiotherapy) of Upton spent over £10,000 on a private snooker room took him to Killarney for the six reds tournament where he won some £500.

Young Mr Glover always has excuses for his many defeats. The latest excuse being called “Farty” by you and others for practicing a beautiful and a very attractive cue action that’s unique, copyright and almost impossible to copy without detail..

Please don’t take offence Mr X as Ian loves to be liked and would give much for a friendly hello from a real snooker player. Mr Hey You

I have said my peice, i dont use these blogs (no disrespect to other blog users). I have no longer have anything to say, people who know me know what im like and i have nothing to prove to nobody! What Mr Hey You has said there is massive exaggeration as im sure you all know. Anyway im sure you dont want to know about our dispute and you want to carry on with Dave Hendons Blog. Apologies Dave just wanted to clear my own name! All the best! Ian Glover

i do not have a job at the academy nor do i know who ian glover is or john cox. But i would guess niether of them want you commenting on them as mr glover has already stated. This blog just gives you a pathetic little self indulged connection with snooker when in reality if you were to speak to real snooker pro,s they would pity you or just laugh and tell you go away.

Snooker © The Fine Art Method
A secret is wasted if not shared
Dear Dave
How are you lad! Thanks sincerely for the posts; you’ve been very brave.
Our mystery man @ 9:13 must have a point to make Dave but the dear wee man keeps it a secret and harps on endlessly on the imaginary dangers of the “Fine Art” copyright.

If Dave was to bar my posts as you Sir perpetually request! What is the world being saved from? Snooker is at its lowest point for thirty years without one new millionaire.
The Fine Art © Method has purpose and positively is the future of the professional game. Why Mister X do you keep using the plural tense for blog persuasion but never a name.

As for Ian at 6:41 pm and “Clearing his name”. You have had free practice time for 17 years, plus earned thousands of pounds in tournaments but not once have you offered a “Cash Thank You”.

By all means let the matter rest Ian as I have not said a word yet. Mr Hey You

hey you, you are the not the best person to be giving english or grammar lessons to anyone!

It seems Mr Hey You ignores the posts he cannot think of a decent reply to, or one that shows him up for what he is.

a person who tries to look down at others?