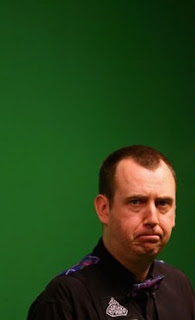 One of the most welcome things to happen last season was the return to form of Mark Williams.

Having returned to the elite top 16 in 2009 he is now back in the top eight and has already won the campaign’s first PTC title.

In between Williams reminded everyone just how good he can be by winning the China Open, his first ranking title since 2006.

The key to Mark’s success has always been his laid back attitude. He gives the impression that nothing much bothers him most of the time.

In his period in the doldrums he had various off table pressures that meant he was no longer happy-go-lucky.

There was also, perhaps subconsciously, the notion that after completing the grand slam of all four BBC tournaments and occupying the world no.1 position in 2003 he no longer had anything to achieve.

Williams won’t have enjoyed having to qualify during the 2008/09 season but in the long run it has done him good.

He also now has his own snooker club and seems to be back in the groove generally.

Time is against him. At 35 he is now considered to be on the back nine of his career but, as he proved last season, he is still capable of deadly performances.

His strength was always his single ball potting, forcing his way into frames. He can scrap it out and his temperament is rock solid. It makes for a highly effective game when it all comes together.

I spoke to Mark briefly at PTC 2 and he seems to be as enthusiastic as ever about his snooker. He was a big supporter of Barry Hearn prior to the EGM and is relishing the increased playing opportunities that are ahead of the players, not just this season but in the years to come.

Williams, at his best, was the sort of player you would pick to play a frame if your life depended on it.

Regardless of the problems he’s had in recent times, he is getting back to that sort of level and there’s no obvious reason why more silverware shouldn’t be heading his way this season.
Posted by Dave H at 10:00 am

I think his sweep of all four BBC titles is the greatest achievement of the last decade. He achieved total dominance in snooker's most competitive era and as such I just think he burned more fuel than his peers. I wish the return to form had come slightly earlier, because at 32/33/34 he would still have had time to seriously challenge for another world championship, but I'd be surprised if a player over 35 wins it these days.

In the O'Sullivan,John Higgins era,
Mark Williams will always be seen as the 3rd guy.

However,what a damn good 3rd guy in that list !

He makes the game look so easy when he strokes the balls in,
his relaxed,non-tense cue action
is an asset to him.

17 ranking event wins in 24 Finals
is a superb record & I would expect him to increase his tally
to 20 rank event titles before he is done.

By all accounts,Mark has a wicked sense of humour away from the table,but the viewers only see
fleeting glimpses of this - which is a shame.

Williams has always had a steely big match temprament,superb
single-ball potter & can mix it
tactically aswell - the only slight weakness (and it is slight)
is that he doesn't always clinch
frames in one visit as often
as some of his competitors.

Now Mark Williams has comeback to
form & playing near his best -
I expect he will have at least
another 3-4 years of being a
major contender for titles.

Ranking Event Titles is an unfair measure of a player's career success - especially for those players who were at their peak
in the 1970s & early 1980s before the ranking circuit expanded properly.

So,Mark Williams is still placed
7th on the alltime Career Titles
list anyway & should go 6th place
during this season.

Note - I didn't include Amateur or
Mosconi Pool Titles in this list !

Snooker © The Fine Art Method
A secret is wasted if not shared
Dear Dave.
How’s tricks lad and thanks for the posts. I think Dave you should advertise the fact that Mark Williams is the “Man in the Know” for finding lost form or is it “Lost Ability”. Mark came back from the dead .to be a regular winner.

Is Stephen Hendry too proud to ask Mark for the secret formula? In turn does Mark have copies for sale of the magic prescription?
Mark Williams turned his game round quite recently therefore must know now exactly what he is doing right or wrong when the ball fails to drop.

One of the biggest faults in snooker Dave is to separate positional play from the pot. Mr Hey You

the fine art method has nothing to do with Mark W, so why mention it, you fool?

A fabulous, fabulous player. I remember watching him many a time when he started out back in '92 up in the Norbreck Castle. When he practiced, I always stood at a distance watching him. Again, when the B+H comp was being played up in Scotland, I was watching him practice up in John Spencer's Snooker Club in Stirling. He hit this shot which still amazes me. I've have never ever seen a ball, to this day, hit harder with so much control.

The man is an asset to our game & yes, it is great that he his back in the mix & quite rightly, one of the Top 8 players in the world.