THE SCORES ARE ALIVE WITH THE SOUND OF SNOOKER 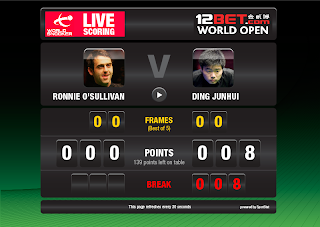 The 12bet.com World Open is notable for its many changes to the traditional format but also because it marks the launch of worldsnooker.com’s new live scoring feature.

Live scoring has tested the patience of legions of snooker fans over the years through its unreliability.

It got so bad this year that World Snooker Ltd chairman Barry Hearn ordered it should be taken down completely rather than subject the governing body to more ridicule.

At the same time, a new system has been developed and will go live tomorrow.

It has been designed by SportStat, a leading company in the field of sports statistics and information systems.

As you can see from the exclusive screen grab above, it will detail the match score, score in the current frame, current break and, unlike the previous model, how many points are left on the table.

“We look forward to introducing an improved range of functionality over the forthcoming months that will provide an ever growing audience with up to the second data, live from any World Snooker qualifying or main event,” said Hugh Copping, managing director of SportStat.

Features will be added as the season goes on and SportStat tell me they are likely in time to include a record of previous frame scores in a match and statistics such as pot success rate, player profiles and other relevant information.

All of this will be particularly popular with snooker fans in non-televised events such as the Player Tour Championship and world ranking event qualifiers.

It will also help bookmakers price up tournaments and run in-play betting markets.

As with any launch there may be a few technical glitches but it all looks good to me and I hope it enhances the enjoyment of tournaments for the fans.
Posted by Dave H at 12:00 pm

The hills are alive with the sound of music. lol

Very much welcomed. Barry Hearn continues to deliver time and time again. Still can't believe people voted against him, I think this tournament is going to be a big success for Barry.

Wouldn't be World Snooker without a "technical glitch" would it?

I think its terrific news for snooker fans that World Snooker have managed to catch up with what TSN had ten years ago.

I predict white-hot meltdown within the opening frame of the first session, resulting in the total demise of the polar ice caps.

It all looks and sounds good but the biggest problem with the previous incarnation is that it was unreliable - it just kept breaking down. We have heard nothing about whether the reason for the breakdowns has been identified or has been fixed. That is the key to this, regardless of how pretty the front-end looks.

with respect to the new live scoring until i see it in action at EPTC2 i wont be convinced of it..

launching it with a 1 table set up is all very well and good but there's 10 tables in brugge and that's where i want to see it working and working un broken throughout that hectic tournament.

it better be available from all PTC Events as well.

it's all good but the question is - will it work on ipod and such like.

We dont need it for the world open as its televised. The important thing is to have it for the ptc's and non televised events.

It looks like it broke down after Ding's first red and black - I've been sat here for the last couple of hours waiting for it to change!

Is the whole website being re-designed all are they just changing the live scoring section?

Just on another point, why wasn't Alston Eliot brought in for this? They already do the Premier League Championship on top of BBC coverage, would have been easier surely?

Also, when the scoring broke down, press room were getting print-outs of live scoring and stats anyway, didn't they? How come if so?

Joe - as far as I know the website will change at some point.

I think Alston Elliott will also have an input. Whenlive scoring broke down on the website it usually still worked at the venues, hence the media could receive scoresheets.

Thanks for that info. Just curious, as the scoresheets were also on hand with mins per frame et al.

Well, I hope WSA aren't just papering over the cracks with the updated live scoring. Think we all agree that it has to stand the test of time with a PTC event - which was where it crashed.

And with more new tournaments this season, Hearn must know that for the latest info,premier league, and tickets, people will be on there all the time.

BTW - do you or any folk out there know what Jimmy White's walk on music is at the W.O?

Expansive coverage will allow nothing less (or more) than to promote the disingenuous bewilderment of the players.
This defines snooker B.Hearn style and everything than goes with it, frills and all.

I suggested London Calling by The Clash, but we'll see

In my opinion White's walk on music should be Cool For Cats by Squeeze.