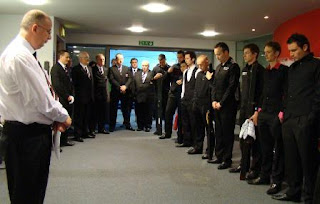 The twice world champion died at the age of 61 last month.

Higgins's daughter, Lauren, read out an emotional poem she had written in tribute to her father.

His former wife, Lynn, and son, Jordan, were among the family and friends in the packed catherdral.

The Dean of Belfast, Houston McKelvey, told mourners Higgins, "at a very young age encountered two of the greatest temptations possible - fame and fortune. He found it difficult to cope with both. He was not the first to find this difficult and he certainly will not be the last."

Hendry said afterwards, "If it wasn't for Alex, I probably wouldn't have had a career in snooker."

In Sheffield, players and officials observed a minute's silence before the start of the Shanghai Masters qualifiers (pictured).
Posted by Dave H at 11:45 am

How kind it was of Stephen Hendry to make the effort to go to Belfast today. I think Alex would have really appreciated that. A very sad day and a chance to remember the man, as well as Alex the snooker genius. Whatever faults he had, the world is a sadder place without him.

R.I.P Alex.
A sad lost of the snookersport!

It was such a sad day today watching Alex's funeral and disappointing that so few from the snooker fraternity did not have the decency and humanity to attend.Those that did will always receive the utmost respect and affection.
Bryn (2.26pm) said it was good of Stephen to turn up but that's what true champions and gentlemen of the first order do - a true legend himself.
I know my eyes are not what they were but did I miss the likes of Steve Davis, Ronnie O'Sullivan, Terry Griffiths etc? Not to mention the current Chairman of World Snooker, Barry Hearn.
I hope those players past and present who were not there without good reason can look at themselves in the mirror tomorrow.

Would he have gone to any of their funerals?

He may have called himself the 'peoples champion' but, you have to ask, what kind of people?

I think 4.07pm makes a good point. Without Alex the game of snooker as we know it would not exist. It would still be confined to hole in the wall joints or staid workingmens clubs. The players of today (and yesterday) owe their fame and fortune to Alex who made the game irresistably compelling. That's why there should have been better representation from the snooker "brotherhood"

4.29pm - what kind of people? Well people who enjoy the intricacies of the game. I'm big enough to acknowledge he was no saint but if you can't see the legacy he gave to the game then I guess you are not a true snooker fan.

I think Higgins attended Paul Hunter's funeral, so he paid his respects and he didn't owe Paul Hunter anything.

I can understand players who never knew him not attending, but certainly players who played alongside him and weren't in the qualifiers today should have made the effort, even if it just came down to professional courtesy.

I think 4.07 is over reacting a bit. Every player can't make it to every ex players funeral.

While I am in no way discrediting the greatest entertainer in the games history, to suggest that the game wouldn't have taken off without Alex is absurd.

The real catalyst in snookers success was pot black, the programme that was intended as a vehicle to showcase colour tv, but instead showcased the fascination that is top level snooker.

The hurricane certainly added weight to the bandwagon, but I think it would have taken off anyway.

Indeed without the iron hand that Joe Davis and his cronies imposed on the game, it probably would have taken off sooner. Pat Houlihan was a hurricane in the wings throughout the 1960s but was considered too disreputable for Joe and Co to even turn professional.

Thats a debate for another day however, and today belongs to Alex.

What a great turnout for his send off. That he lived his life as he did and managed to see 61, despite cancer is a testament to his survival skills.

We'll see flawed geniuses again, we'll see hard drinking chainsmokers who do all their money on the nags, but we'll never see anything like the hurricane again.

Well yes i sort of agree with 4.07. Shame more of snookers greatest werent there. It would have been nice to see Davis, Thorburn and Taylor (put old differences behind them) Griffiths and Ronnie there... But lets have thanks and respect for those that did go. As an ordinary working guy i'd have liked to have gone myself, to pay my respects at the procession, but it was just that bit too much to get a day off work and flight to Belfast. RIP Alex, thanks for being you !! dannyd0g.

You could argue that the players who did not attend the funeral of Alex Higgins are not hypocrites in any sense of the word.
The death of anyone is a sad occasion but its even sadder that Higgins was reportedly dead for many days in his small flat before discovery, yet his funeral is (rightly) a lavish send off.
However, something does not ring true, either Higgins was an icon who was popular the world over or a terminally ill man who didn't have a friend in the world when he needed one most.
Like I say, any no-shows in Belfast today should not be examined any more than the attendance of luminaries from the sport who presumably showed up in good faith.

I think Taylor did well by not going.
Its no secret he and Alex despised each other and some things which were said between them can never be unsaid.
With the suggestion that Alex was a Belast child who knows how cynically it would have been viewed if DT turned up.
Shortly after Dennis's mother died I don't recall Alex being particalularly sympathetic.
These things are unforgettable and if Taylor had attended he'd have been piloried for his duplicity.
I say he did the right thing by admiring Higgins snooker talents last week when interviewed and leaving things at that.
Think about it fellas.

I'm a bit confused, why should people who didn't like Alex attend his funeral? For gods sake Alex wanted Taylor shot, therefore I understand fully why he might not want to attend. Higgins didn't have a nice word to say about Davis, so again, why should he attend. I respect Alex's flair and commitment on the table but off it he could be a pretty vile character. Yes he helped the game's popularity but who's to say it wouldn't of progressed anyway? It's definitely Alex's day but you can't lambast those that didn't attend if they didn't have a more personal relationship with him.

Alex Higgins was a man of the people not a man for ceremony or the establishment.

snooker changed for ever on 18th of march 1949 let no player forget that when they play this game in the future.

O'Sullivan ,Davis and the other professionals who played with A Higgins during the 70s/80s should have been there. We'll just have to wait and see what their reasons for not turning up were. It is an exaggeration to say snooker wouldn't have taken off without Higgins but it sure wouldn't have taken off anywhere near as quickly.

Alex was a package of Brilliant Snooker,Brovado and a pure showman.

Pat Houllihan was a quiet modest man that let Joe Davis walk all over him if anyone thinks Alex would have let that happen to him like it did to pat think again.

yes pat was a brilliant player in his time but there was so much more that made Alex who he was.

For people wondering about the absence of some people they thought might have attended Higgins' funeral, I can tell you that Terry Griffiths is away on holiday with his family and was therefore unable to attend.

Taylor made great play that they had bumped into one another at the waterfront in Belfast and burried the hatchet. Others may have had media/playing committments at Shanghai qualifying. At 75 or whatever Id give Ray Reardon a pass if he didn't want to leave Devon for a funeral especially when he would have to go to Belfast ie not quite the case that he could be driven there in an hour or two and driven home. Some of the others just didn't know and/or like Higgins as a man. Most of them made it clear that they respected him as a player but didn't like him as a man if you read between the lines.

Janie, thanks for following me on Twitter under the moniker 'theweewelshwitch'.

It is sad that he died and we should remeber a lot of what he did for snooker. However, if a non-celebrity had died having behaved the way he had down the years, he would have only got about 2% of the audience that Higgins got for his funeral.

Having said that the game owes him a lot of gratitude and perhaps the likes of Steve Davis, John Parrott and even a snooker scene presence should have been felt. Although I am guessing Clive didn't like him and that Dave barely knew him, so it is understandable why there wasn't anyone from SS present.

ffs, what kind of weirdos do you have to be to moan online about who was or wasnt at anyones funeral? its no ones business except those involved. get a life.

I am not moaning about who was there, just merely making observations as to why some were and some decided against it. There is no question that it should be down to the individual.

the point is that a lot didnt "decide against it" but had plans in advance that just *couldnt* be altered.