A SONG FOR SELBY 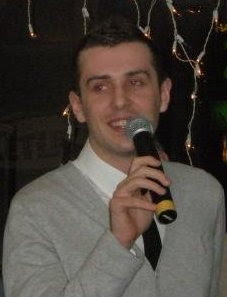 Bryan Claasz has got in touch to inform me he has written a song about Mark Selby.

You can listen to it on his Myspace page here.

I don't think Bob Dylan will be losing any sleep but a couple of listens ensures the song stays in your head, even if you don't want it to.

Snooker has a long, inglorious relationship with popular music, taking in the seminal Snooker Loopy, the Romford Rap, Alex Higgins's One-Four-Seven - with its melancholic B-side Life's in the Pocket - and Peter Ebdon's non-chart bothering efforts to name but a few.

And this isn't the first time a player has had a song written about him.

I recall being at a tournament in Kilkenny a few years ago when a man claiming to be Ireland's leading Elvis impersonator dropped in, as you do, and presented Ronnie O'Sullivan with a CD.

'Elvis' had rewritten 'Rocket Man' in tribute and to the best of my knowledge has not yet been sued by Bernie Taupin.

Sample lyric: 'And I'm gonna be hi-i-i-igh on the black by then'

Ronnie loved it, so much so that there was talk of playing it at the Crucible, although he was presumably so bored being at the game's premier event by that point that he forgot all about it.

I've heard Selby do karaoke. He's not bad. Ironically, he does a pretty mean version of 'Rocket Man' (with the original lyrics).

Maybe Barry Hearn should set up a kind of snooker X-Factor.

And of course, the classic cover of "The Wanderer" by Four Away (Tony Knowles, Jimmy White, Alex Higgins & Kirk Stevens)

OMG. Its hard enough to watch selby play. now we have to listen to hjm sing as well.

don't forget the cover of Status Quo the wanderer from the Howard Kruger Framework Mob that consisted at that time Alex Higgins,Jimmy White and Tony Knowles.

That would be one way to get Simon Cowell involved in snooker.

I actually bought The Wanderer and Snooker Loopy! (and you wandered why I'm anonymous.....)

Let's not forget Dominic Dale's rendition of "My Way" at Shanghai:

I'm a bit off topic here I know, but theres not an awful lot I can add to the snooker music subject.

I've just been reading your snooker scene article "So near, yet so far" and in particular, the Taylor comeback against Davis.

It must be remembered that only a season and a half before the match, that Davis lost the UK final to Higgins after leading 7-0.

After the 85 final it looked as if the only chink in the nuggets' armour was defending a big lead. I can remember SS at the time discussing "mental scar tissue" and "having lifes fundamental certainties taken away".

It was all the more remarkable then, that in the final of the following seasons' grand prix, that Davis, having led Taylor 6-1, and been pulled back to all square, was able to win the decider.

It was a prime example of a true champion, that after those two devastating defeats, that he could prevail when it would have been all too easy to collapse.

This must have reinforced Davis's self belief, and he went on to win another 3 world titles.

I wonder would he have won them had Taylor went on to win that final.

As I'm not into muzak ....... I hope the next Snooker Scene will adequately reflect the fans feelings about the appalling non-attendance of the snooker hierarchy to yesterday's funeral. It did the sport no favours whatsoever. It seems that snooker will always find a way to demean itself and look stupid thereby giving the likes of Patrick Collins (Mail on Sunday) and his ilk all the ammunition they need to belittle the game.
Where was Barry Hearn? He was keen to use Higgins in the early days to make money by bringing him to Romford for those huge money matches against Davis. He's recently been all over the media saying what a character Higgins was. Seems Hearn, Davis, O'Sullivan et al just couldn't be arsed. Hypocrites all.
Incidentally was Mark Allen there? Mary Peters and the great Barry McGuigan were there.

C'mon Dave - what are your views on this?

Steve hated Alex and Alex hated him. Why should he go? He'd have been more of a hypocrite if he had.

I don't know what it has got to do with "Anonymous" people who does and does not turn up to a funeral actually. No one is in a position to judge here. I am a fan of snooker and of Higgins and I am certainly not finding non-attendence by certain people in the snooker world as "appalling". How ridiculous. It's up the individual if they want to attend or not. I dare say Mary Peters and Barry McGuigan just had a 5 minutes stroll from home to be there.

It's personal choice and also depends on personal circumstance.

Steve did not hate Alex he was frightened of him but respected him.

the only thing Alex hated about steve was what he represented and he won everything it was not personnel and steve better than anyone knows that.

4.13 is right.no one can defend the indefensible.

4.13, funerals are for family and friends to mourn and say goodbye to the deceased. Im sure if the snooker world knew you wanted some kind of circus, they'd have all cancelled their plans and wasted two days by flying to Ireland to see off a player most of them probably didn't even like.
Take a chill pill man.

A lovely turn out yesterday from the folk of Belfast. Apart from Hendry,Doherty,Selby,Murphy,White,
Swail,Thorne,Virgo and David Taylor,did anyone else go?

As for music and snooker,I seem to recall a discussion on here before. You might want to resurrect the Spinto Band interview, other gems over the last couple of years - apart from the obvious ones stated above - are: 'Jimmy White' by indie band Dustins Bar Mitzvah and a song based on Ronnie O'Sullivan by an offshoot band of Mark E.Smith.

Am currently waiting for Neil Harmon to finish his lyrics on a snooker song with the Duckworth Lewis Method...

Joe, funnily enough, I gave one of the Spinto boys the Bill Borrows book about Higgins, which would have been quite an eye-opener.

I wonder if they think all snooker players are like that?

"but a couple of listens ensures the song stays in your head, even if you don't want it to."

While we're on the subject of snooker related music I'm hoping someone out there might have some info on an instrumental piece that's played in the Crucible Theatre before each session starts. It's one of four pieces played, along with Drag Racer, Pot Black Theme and The Unknown Man but I've never been able to track it down.

John Parrot referred to it in a backstage BBC piece a few years back. He's sitting in a dressing room describing the emotions felt before a match..."and when you hear that music da da da da da da da da, you know it's time to play".

Does anyone know what this piece of music is - I'd love to be able to track it down.

On a related note - I'm a sucker for the BBC montages compiled over the years and would be interested to know of any other songs used for these great pieces, to add to the list below:

Is it The Entertainer by Scott Joplin?

In 1994 they used 'Every Breath You Take' by The Police for their montage. No idea why I remember that.

thanks Dave - that's not the one I'm thinking of but I had forgotten about that one.

The one I'm thinking of is a slow, very moody piece with a kind of steely sound to it.

Thanks anyway for The Entertainer..a nice addition for my snooker iPod Playlist :)

I used to those montages and the shot of the championship.

Am sure the Spinto boys loved the book. Snooker and music go hand-in-hand, hope it inspired them to write some top tunes!

Holt should get his brother to do his walk-on music.

O'Sullivan walks out to Ian Brown's - Stylify. Believe it or not, but Brown and O'Sullivan are very similar in personalities and could certainly see them working together,not necessarily in music...Brown likes his fashions and fitness.

It's quite a shrewd career move, with walk on music now the norm I wonder if all the players will end up with personalised songs? Just imagine how much a normal 30 second advert on ITV would cost.

Chalkey, Makin your mind up by Bucksfizz was used in 1981.

There is a b-side by a band called, Von Sudenfed that is about Ronnie. I am not sure of the title, but the group was a side-project created by The Fall frontman Mark E Smith.