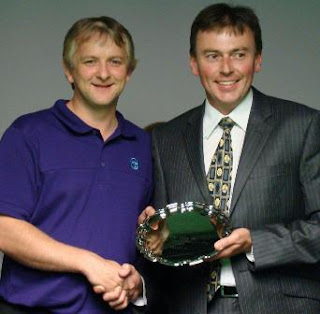 Barry Pinches' capture of the fourth Players Tour Championship title of the season in Sheffield tonight was a victory for a decent, hard working professional.

Like many players, he had formed the view that snooker was not going in the right direction and was thus a staunch supporter of Barry Hearn when he declared his willingness to become WPBSA chairman if a vacancy arose last Dcember. Pinches (pictured with Jason Ferguson, who became WPBSA chairman after Hearn went on to head up World Snooker Ltd) is now benefiting from the increased playing opportunities that have been introduced under the new regime.

He has earned £18,600 so far this season. This is just £1,000 less than he earned throughout the whole of last season and it is only August.

He came from 3-1 down to beat Ronnie O’Sullivan 4-3, a significant achievement even if there was no crowd or TV cameras, a scenario which would obviously favour the three times world champion.

O’Sullivan, who had been in brilliant form throughout the tournament, looked set to win 4-2 but faltered and Pinches made a good 36 clearance before winning the decider with a solid 64.

The PTC is a meritocracy. Pinches has come through from a field of 91 professionals and many amateurs to land the £10,000 top prize.

He has done well to survive on the tour this long. Barry turned professional in 1989 after winning the English amateur title.

By 1991 he had made it to the Crucible but had to wait another 13 years for a second appearance, where he beat Jimmy White and took Stephen Hendry to a decider.

He had found some form around this time after several years of disappointment. He reached the 2003 UK Championship quarter-finals and the same stage of the 2005 Grand Prix.

He drew attention for his distinctive green and gold Norwich City waistcoat and nearly joined the top 16 but after a season at 18th dropped out of the top 32 and back into the qualifying quagmire.

It must be hard to enjoy snooker mired in the lower ranks where the difference between victory and defeat can be getting paid or not.

Now, Pinches is on the up and up at the age of 40. He is surely certain of a place in the PTC grand finals next March.

Good for him. He’s remained committed to the game even when, I’m sure, he’s wondered if he shouldn’t be doing something else.

Pinches is an unassuming sort. He was once described, laughably, by a newspaper as ‘lording it round the snooker clubs of Norwich.’

Nothing is further from the truth but if he feels like lording it tonight nobody could possibly blame him.
Posted by Dave H at 8:22 pm

Brilliant result, well deserved. Have spoken to Barry on a number of occasions and he's always good value.

It really is a great aspect of this series that players like Pinches and Ford can build their professional CVs.

And I am happy cause I invited Barry Pinches and Tom Ford to an exhibition the day before Fürth.

And that happend before the first PTC. :)

He actually looks pretty normal when not in the disgusting yellow and green outfit.

Apologies if you have already answered this question in a previous blog (or cannot answer)but will the winner of the PTC Final become a ranking event winner? And has Hearn decided who will televise it?

Do you know anything about Jimmy White and him withdrawing due to gout?

persanally i think the winner of the final in march should be credited with a Ranking Title .

potentially there was 27,000 points to the winner the World Champion only gets 10,000 points.

already Pinches got 5,000+ points out of 4 events.if anything is a "RANKING" Tournament its this combined to find the ultimate champion.

Jimmy had gout and so withdrew. The PTC counts as a minor ranking event title, although the finals should probably count as a full title. Details of TV coverage haven't been announced yet.

The grand final only carries 3000 points though, that's just over half the tariff for standard events, so is still closer to the tariffs for minor events. I think the PTC should be kept separate from the proper ranking circuit stats to keep it 'clean'.

I didnt recognise him at first with the hair.