THE LONG ROAD TO SHANGHAI 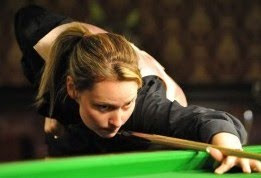 If it’s August it must be Sheffield. Or, more specifically, the Roewe Shanghai Masters qualifiers, which start today.

It’s farewell Prestatyn, which will not upset many players. The set up for playing at Pontin’s was excellent and everyone was made to feel welcome but it was hardly handy to get to (unless you’re Ricky Walden). Tony Drago once said of it - in an interview - "It's the sort of place where you could kill someone and they'd never find the body."

Sheffield is, of course, a city that will forever be associated with snooker. The Academy holds eight tables and two have been set aside for practising, so each round will now be played over three sessions.

Although there have already been two Players Tour Championship events, each carrying ranking points, this is where it really begins for the circuit’s new players.

It’s the first day at school, university and work rolled into one.

It’s no longer a 96-man circuit, rather a 95-man and one woman circuit. Reanne Evans (pictured), the undisputed women’s no.1, starts off against Alfie Burden, the reigning IBSF world amateur champion.

Allison Fisher, the best women’s player of them all, beat a few top male professionals in the Matchroom League but never really made any progress in ranking events, although when she played the game was open and so there were many more rounds to negotiate.

Igor Figueiredo becomes the first Brazilian ever to play in a full scale ranking event when he cues off against the experienced Paul Davison.

Liu Song will be looking to make the most of his call up, which came about through John Higgins’s suspension, when he tackles Ben Woollaston.

I’m looking forward to seeing which referee gets to officiate the superbly named Thanawat Tirapaipongboon, one of three Thais starting out in round one.

Of the young players worth watching, look out for Liam Highfield – more about him in August’s Snooker Scene – Anthony McGill, who reached the quarter-finals of PTC2, and Jack Lisowski, who is sensible enough not to be eyeing a meeting with Ronnie O’Sullivan in Shanghai just yet.

I’m not sure what’s happening with live scoring but, as ever, Global Snooker will provide updates.

It may seem pointless given that there are no spectators allowed in to watch aside from a few pals of the pros but I think the players should pause for a minute before play starts to remember Alex Higgins, whose funeral it is this morning.

The new stars will probably never have seen him play bar the odd clip on Youtube. The older players will know all about the extraordinary excitement the Hurricane generated and will know too that, regardless of his many faults, the circuit came into being largely because of him.
Posted by Dave H at 8:00 am

Global is fantastic but we need Live Scoring at this Level.

as someone pointed out all they need to keep Live Working is delete other things off the site ....Live has to be priority.

Live streaming from the Qualifiers would be even better. :-)

As for the draw, isn't Paul Davison playing Xiao Guodong?

There was a minute's silence this morning before play started, attended by all the players, wsa officials, referees and guests

The new live scoring system for WSA is still "under construction" so we'll try and keep you up to date on global.

I will be in and out of the booths to do photos but will update as often as I can.

First frame between Alfie and Reanne was a bit scrappy. Reanne had Alfie in a brute of a snooker on the last red but ultimately Alfie got the red and was clearing up. he missed the blue but so did Reanne but unluckily for her she left it right over the middle pocket

get a grip Dave!!

I've sent you over a photo of minute's silence. not sure if you can add it to your blog

I preferred a broken live scoring than to have none at all.

Good to see the season kick off in earnest.

Looking at the provisional rankings on pro snooker, I notice that there is still one big anomaly in the rankings that disadvantage qualifiers.

A first round loser gets 280 points compared to a top 16 player who gets 980 for losing his first match.

That means that a low ranked qualifier can win 3 matches and receive 805 points while a top 16player can lose 5-0 and receive 175 points more.

Surely all players should get the same for losing their first match.

I know Ian Doyle, as manager of most of the leading players, objected vociferously a few years back that it was too hard on the top players to get no points in round one, as was the case back then.

Why are the top 16 protected like this? If they think its an advantage to the qualifier, well then the qualifiers will rise and the deposed seeds will have the same opportunity to reimpose themselves when they become qualifiers.

The top players are rightly guaranteed seedings, invitations to events and TV appearences.

They should not be given extra assistance to keep their position.

Hear hear ! At least all players are now getting a chance to improve their ranking under the open and fair system of the ptc .would like to see bigger events go back to the top 32 being seeded in final round as opposed to the top 16.

It's not that important now though. You could do away with seeded loser points altogether because with ranking updates throughout the season, a player can drop down the rankings and find his natural level and start picking up some points at an earlier stage, so he can't become the "victim" of an inflated ranking anymore like with the old system.

thats the privilege of being higher up the rankings now lets see lower rankers put in the work to get up those rankings like everyone else has had to.

first 4 frames with Liu Chuang and Michael White were pretty lively. Three centuries, a 70 and a 64.
Nothing wrong with that.

Prestatyn is easy enough to get to-It may have its faults,but at least there were good spectator facilities there.
The first and only opportunity to watch the qualifiers/PTC at the EIS this season may be for the world championships.

Sheffield is easier to get to than Prestatyn - unless you live in North Wales - and there's much more to do in the surrounding area.

But if you can't watch the snooker then what's the point? The new era hasn't quite got going yet.

Do you think Bravo would be interested in showing some snooker as they made their PDC darts debut at the weekend, with an interesing mix of the great James Richardson and the comedian Dave Gorman fronting the coverage. Has to be worth a look, doesn't it?